Did you know that Wimbledon has a signature dish (strawberries and cream)?

Women’s #1 seed Ash Barty thinks it’s high time the Australian Open has one too! She’s teamed up with Vegemite and Schnitz to deliver a Vegemite ‘Barty Parmy’ (or parma, as Melbournians know!) It combines our Aussie pub classic with the umami taste of Vegemite!

Barty states “The Vegemite Barty Parmy is the parmy you know and love, just with a little Vegemite added. It’s my secret ingredient to create the Aussiest parmy ever.”

A spin-off of the “Barty Parmy” is also available nationwide at Schnitz until the end of January! The Mitey Parmy features Schnitz’s handmade, pan cooked schnitzel, topped with Napoli sauce, mozzarella cheese, and that iconic drizzle of VEGEMITE, served with Schnitz’s mouth-watering original chips.

If you want to try it at home, check out the recipe below! Will you be making it?

1. Preheat your oven to 200°C and line a baking tray with baking paper.

2. Place the chicken breast between two sheets of baking paper and pound using a meat mallet (or rolling pin) until about 2cm thick.

4. Heat oil in a frypan over a medium-high heat. When the oil is hot, shallow fry the chicken until golden and cooked through. Place on a paper towel to drain excess oil, and then transfer to a baking tray.

5. Spoon over Napoli sauce, top with mozzarella, squeeze over VEGEMITE and finish with a little more cheese. If adding ham, put on after the Napoli sauce.

6. Place in the oven and cook until the cheese has melted (approximately 5 minutes). Serve with a simple side salad or vegetables.

TIP: If you are looking for a quick and easy alternative, try pre-crumbed oven bake schnitzels, which you can buy from your local supermarket or butcher! 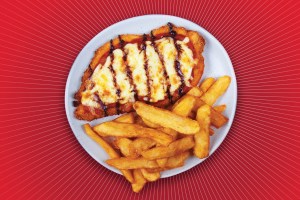 Missed The Christian O'Connell Show? Catch up by clicking play below and join us from 6AM every weekday!
Parma Parmi schnitz Vegemite

Have You Tried Melbourne's Hottest Burger?

Maccas Has Released A Line Of Budgy Smugglers!

BWS Is Giving Away $20 Million Worth Of Prizes On Their App!