Last night’s episode of Married At First Sight was a doozy… and not in a good way!

The producers eased us in with some lighthearted moments from last night’s couples, making sure to flag the important point that Domenica and Jack had sexytime but SHOCK, Love Island-lite couple Ella and Mitch did NOT! Life changing info for sure.

Tonight’s first couple is the louder-than-life Texan whose name I had to google cos the show prefers to call him Texan (it’s Andrew Davis, for those playing at home) and his wife Holly Greenstein, whose biological clock is tick-tick-ticking and who is open to giving and receiving love… as long as it’s not from Texans.

You’d think they would be a good match considering they both use the words universe and manifestation about 15 times each in their intros, but I have a sneaky feeling it’s being used as a front by at least one of them. Holly is suuuper excited to become impregnated by her husband asap until she finds out he is Texan and begins spiralling into a tangent that I’m not touching with a ten foot pole cos yikesss. BUT if you’re here thinking that she can’t possibly be for real, here’s a tidbit I found interesting:

Husband, re Holly: “Does this seem like an act to you?”
Colour me shocked at the first google result…#MAFS #MAFSAU pic.twitter.com/31UeSue2TF

And if the first couple didn’t leave a bad taste in your mouth, the second one is here to up the ante! Our bride Selina Chhaur is a cute, bubbly hairdresser with strict Cambodian parents who have very high standards for her that she struggles to meet, and disapprove of her going on MAFS (alright though, that part is totally understandable for anyone who’s ever watched an episode). The experts so kindly partnered her up with the delightful Cody Bromley, who has a combover and moustache aesthetic that is definitely a choice, and lost his father at 15 years old. He states that he has a hard time being vulnerable because he likes people seeing him as an “energetic person”. Hmmm.

Within 2 minutes of meeting the vibrant, actually energetic Selina, he starts to look like this guy: 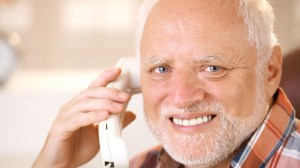 During their dinner, she starts asking him normal questions, like “what are you looking for in a relationship?” and he apparently takes them as an interrogation, and proceeds to spend all his interview time talking about how full on she is and how “he’s great but not that great”.

If you thought he was kind of a jerk now, the honesty box takes him right into Bryce Ruthven territory. For everyone that has forgotten, when his bride Melissa asked Bryce if she was his usual type, he said “I’ll be completely honest, not 100 per cent. I’ve always gone for the blonde hair, blue eyes, tan kinda girl. And usually tall. I can’t say 100 per cent I’d come up to you in a bar and buy you a drink. When I first saw you I thought, ‘Not my type’. But, I thought, she’s not … ugly?”

This guy takes it even further. After asking Selina if she is attracted to him, to which she answers an excited yes and he responds with an awkward laugh, it’s her turn. He answers that he’s struggling with that because even though he apparently thinks she’s a gorgeous girl, he doesn’t have any sexual attraction and “it’s like my schlong isn’t coordinating with my head” And yes, those were his exact words. Selina’s response is an incredulous “wow”, shared by all of us who can see how far Selina is out of his league. To be continued… Do you think he’ll turn out to be worse than Bryce?

I just became president of the “I hate Cody” club. Selina is gorgeous inside and out. How dare he make her feel bad about herself #MAFSAU #MAFS

Missed The Christian O'Connell Show? Catch up by clicking play below and join us from 6AM every weekday!
MAFS married at first sight

Pamela Anderson Splits From Her 5th Husband After 1 Year Together

We Have A Release Date & First Official Look For Bridgerton Season Two!

The Cast Of New Girl Are Getting Back Together For A Show We've All Been Waiting For!