After years of Port Adelaide petitioning to wear their heritage ‘prison bar’ guernsey, the AFL has hit them with a hard reality if they go through with it without their permission at the showdown against the Crows scheduled for next week.

In a statement published on Thursday afternoon, President of the Port Adelaide Football Club David Koch expressed his disappointment over the decision. 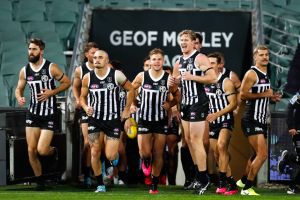 “Port Adelaide signed an agreement with Collingwood in 2019 to wear the prison bars guernsey in our 150th anniversary home Showdown in 2020. At the time, both parties were unable to reach agreement regarding ongoing use of the prison bars and therefore deferred consideration for future use to a later point in time. That’s exactly what we have been trying to do for nearly 12 months now,” the statement reads.

“We also note that the AFL has reached today’s decision based on the existing signed agreements in place and refer to the 2019 agreement only. There is no mention of the 2007 agreement also signed by all parties providing Port Adelaide with the option to wear its heritage prison bar jumper once per year in home AFL heritage rounds. Port Adelaide signed that agreement in good faith.

“As we’ve always maintained, the AFL own the intellectual property rights to all AFL clubs, and therefore this is a decision the AFL can make independently in representing what is in the best interests of the game and ALL clubs. This is a decision for the fans, the most important stakeholders in our game. To treat our fans and the heritage of our Club in this way is disappointing.

“A key purpose of the AFL is to protect and nurture the heritage of the game. Heritage makes our game stronger. Anything we can do to strengthen this bond can only build stronger clubs which is good for the game. The AFL cares about heritage and that should include Port Adelaide’s.

“Our frustration sits squarely with the AFL, not Collingwood. We believe our request is reasonable. This issue isn’t just about Port Adelaide. It is about the passion and connection that ALL fans have for their clubs.

“As I’ve said, this issue isn’t going away. It is too important to our people and our Club.” 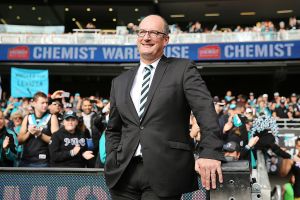 The AFL has also handed down the decision that Port Adelaide would be fined four premiership points should they go ahead with the plan to wear the ‘prison bar’ guernsey in the showdown clash.

This is probably the pettiest response from @AFL_House I’ve ever seen, and they’ve got a lonnggggg history of pettiness.

Does anyone, other than Collingwood execs, actually care if they wear the prison bars on games that don’t involve Collingwood? https://t.co/uPCkm5jIsC

Advertisement
Advertisement
Missed The Christian O'Connell Show? Catch up by clicking play below and join us from 6AM every weekday!
AFL Collingwood Port Adelaide prison bars

These Pubs Are Offering Bottomless Booze During Footy Games