An explosive device set off at a Melbourne Park has flown 150m through the air and crashed into the roof a nearby home in Carrum Downs.

Extensive damage was done to the roof and property.

CCTV footage of the incident has been released by police in an attempt to identify two people who were in the area at the time. 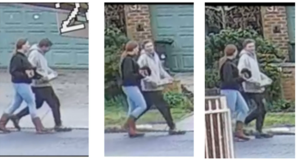 Anyone with information should contact Crime Stoppers on 1800 333 000 or at www.crimestoppersvic.com.au