A controversial random inspection has sparked an online debate after residents started noticing ‘warning’ on their recycling bins.

On Thursday, residents in Melbourne’s north started posting a photo to Reddit, saying their bin had a note saying they had not recycled their plastics correctly.

Moreland council’s bin inspection program is done randomly to ‘ensure residents are putting the right items in the right bin and reduce the impact of contamination;.

If inspected, one of three stickers can be left.

One that says ‘thank you’ will mean there has been no contamination, some will say ‘oh no’ and will have a warning sign.

Bins can also be rejected and will then not be collected. 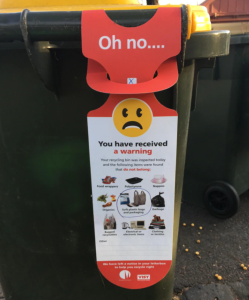 Most people have praised the scheme but some have pointed out flaws, with one saying “I live next to a 24 hours McDonald’s and there are pubs all around. If people aren’t throwing trash in my front yard they’ll definitely put it in the bin.”

Moreland City Council is a municipality in the inner north of Melbourne, covers 50 square kilometres with over 160,000 people.