A photographer has managed to catch a massive cat on camera in southern Victoria, which has led locals to believe that it is the legendary Otways Panther.

Wildlife photographer Amber O’Meara Noseda told news.com.au that she had been unlucky in her search for birds on Friday afternoon when she was driving home and noticed something in her rear vision mirror.

“I thought it was it was a wallaby on the side of the road, about 50m away from where I was. Then I looked again and thought wallabies aren’t black,” she said.

“I thought maybe it was a small Labrador dog. I’ve got a telephoto lens so I grabbed it out of the car.

“It was walking across the road and I thought it was the biggest black cat I’d ever seen. It was certainly not the size of a normal, domesticated cat.” 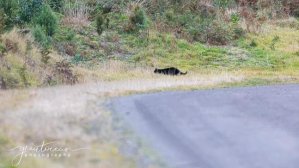 Ms Noseda shared the images on a Facebook group and unsurprisingly, they gained a LOT of interest.

“I’m not trying to say this is an ‘Otways Panther’ all I am doing is showing you what I saw. If this is a domestic wild cat, my god they are/can grow large. I have seen many feral cats before but not this big. Make of it what you will,” she wrote in the caption. 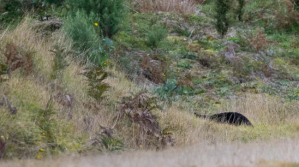 Some people passed it off as a feral cat, but others have heard of the legend of the Otways Panther and were quite certain she had caught it on camera.