A Perth truck driver is being hyped as ‘living his best life’ after a picture of him using a pool noodle as an arm rest had social media frothing.

The picture, posted to Reddit, features the truck driver comfortably resting his arm on a pink pool noodle which was fitted to the top of his wound-down window: 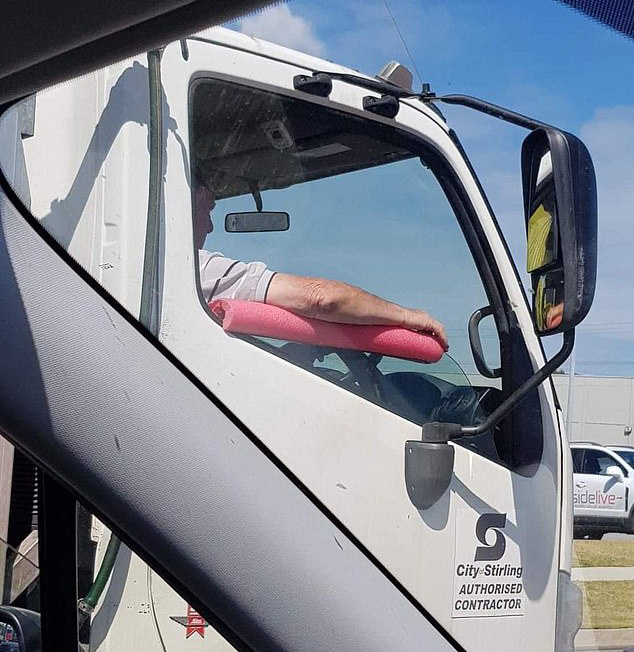 “And they say Aussie innovation is dead,” was one comment.

“Get CSIRO on the phone,” was another.

“That’s how we roll in the best state, WA”

But it wasn’t long before some real talk on arm rests kicked off.

“Looking at it, that design of the cab probably would give your arm support that’s too low for rest over long periods and probably results in rotator cuff pain. (spot the guy whose gamer chair has a pool noodle-esque thing strapped to the arm for the same reason),” one Redditor said.

“Main reason I had to sell my old van. High seat, high roof, car-based interior. All the arm rests were far too low for me to use,” said another.

“That is a fast ticket to skin cancer. I’m not even joking. This is a direct cause of skin cancer, and the vast majority of people get them in older age on the driver’s side arm, from doing exactly this.”

“My dad has to go back every six months to get new spots burnt off. I constantly look like he lost a fight with a barbecue. Put some sleeves and sunscreen on and save yourself a ton of hassles later in life.”

Bang your doors in the garage wall? Use half a pool noodle. We are liking these automobile life hacks. https://t.co/VCnX3nNZUJ pic.twitter.com/Y12T0LPkAm

Life hack: shove a pool noodle under your couch to prevent kids/dog toys from rolling under. pic.twitter.com/GQsFL1XD02

Ever worried you might lose your car in a @WDWToday parking lot? Be like this family and stick a pool noodle out of the sunroof! #innovation pic.twitter.com/Ay0UwxdwHz

Advertisement
Advertisement
Missed The Christian O'Connell Show? Catch up by clicking play below and join us from 6AM every weekday!
Perth pool noodle reddit viral photo