What the HECK is going on in the confectionary world? Every second day, there’s a sparkling news story about the strange and exciting going ons in the candy world.

Today is a goodie. As a HUGE fan of their bananas, this is a game changer.

You should be able to get em’ at like almost everywhere, Coles, convenience stores, grocers.

They’re gluten free and $4.50 a packet so hot diggity damn, go get some.

Because this is such huge news, they had to advertise it with a SPLASH.

Do you know the big banana? The giant banana structure in Coffs Harbour? The one your parents force you to stop at on the way to the Gold Coast?

They’ve dripped fake chocolate all over it and good lord…just yes. 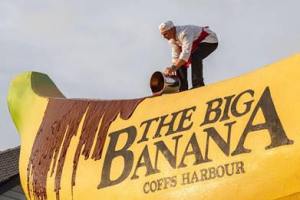 Missed The Christian O'Connell Show? Catch up by clicking play below and join us from 6AM every weekday!
allen's chocolate coated bananas confectionary

ALDI Is Bringing Out A Range Of Specialty Gins Including A Raspberry Blush Flavour!

Vegemite's Flavour Has Had Another Huge Overhaul With A New Recipe