We had no idea what to make of this photo that appeared in our newsfeeds earlier on Friday appearing to show a new ‘Iced Vovo’ and ‘Mint Slice’ flavoured milk.

It was so unusual that many people were suggesting it was going to be an April Fool’s Day joke played by Arnott’s. 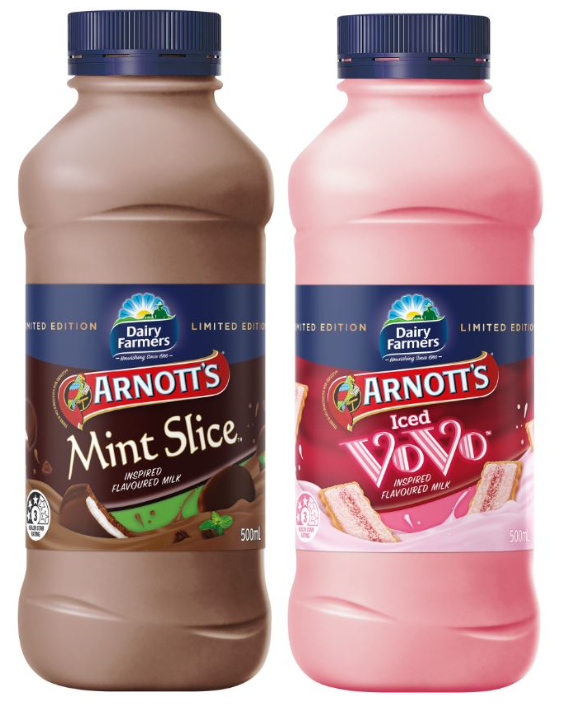 Here’s what they told us…

Dairy Farmers and Arnott’s have joined forces to deliver a modern twist on some of Australia’s most iconic flavours, with a limited-edition series of unique ‘bikkie’ inspired flavoured milks.

Taking dunking to a whole new level, the two new flavours are a fresh take on some of Australia’s favourite biscuit snacks, Arnott’s Iced VoVo and Arnott’s Mint Slice.

Both are bound to get taste-buds tingling and are made with real ingredients; peppermint oil infuses the Mint Slice and the Iced VoVo resounds of fresh raspberry jam.

Both products will launch nationwide in Independent Grocery and Convenience stores this April, with Coles and Woolworths supermarkets stocking the range from May 20.

As this is a limited-edition release, consumers wanting to sip their way down bikkie lane are encouraged to get in fast to avoid missing out.

Coles Marks Down Frozen Chips In 98c Clap Back

McDonald's Is Trialling A Vegan Version Of One Of Your Faves