Yesterday morning a courageous koala decided to go head-to-head with peak hour traffic on the South Eastern Freeway in Adelaide and was lucky to come out alive.

The koala was wandering across the freeway when drivers were forced to slam their breaks on, avoiding the koala but causing a six-car chain collision, causing major delays for the remainder of the morning. Thankfully no one was injured badly. One driver was taken to the hospital with a sore neck from the impact. 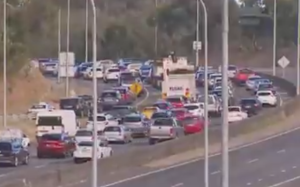 Nadia Tugwell noticed the koala between the stopped cars and the concrete barrier. Along with another woman, the two captured the koala, wrapping it in a jacket, and placed it in the back of Ms Tugwell’s 4WD.

Ms Tugwell told ABC News “The boot is open to the rest of the car, the seats were all up, I wasn’t prepared to save a koala.”

The koala was very comfortable and decided to take the wheel, creating a picture-perfect moment seeming as though the koala was driving.

Police has advised drivers not to stop for animals on freeways due to the extreme risk they’re putting themselves and others in. If an animal is spotted, it is best to call the police assistance number on 131 444.

The koala, who was injury-free, has been released back into the wild and hopefully won’t be wandering onto another freeway any time soon.

Missed The Christian O'Connell Show? Catch up by clicking play below and join us from 6AM every weekday!
adelaide car accident koala south australia South Eastern Freeway