Whether you think what happened to Myuran Sukumaran and Andrew Chan on that island in Indonesia was right or wrong, very few people would be able to stare into the eyes of a loving mother who is preparing to bury her son and think of anything else but her heartache.

Following the death of her son, Myuran, Raji Sukumaran penned an open letter to the Indonesian President.

Her intention was not to get anything from him, but to help him to understand her son better – in the hope that someone who had reformed, like her son, would never have their life taken away again.

Read the heartfelt letter below…

My name is Raji Sukumaran, and my son, Myuran Sukumaran, was executed in the early hours of Wednesday 29 April 2015 under your instructions.
As I make the preparations to bury my beautiful son, I thought I would share my feelings with you. I thought I would share how my son was reformed, was full of life, love and passion, and who so desperately wanted to live his life in service to help others.
I have made this letter open in the hope that it may help other people or their families, in some way as they sit and wait for you to order their deaths.
I would really like to think that you would be able to understand, if you don’t, then feel free to share this letter with your wife, who I think would understand, one mother to another.
My son doesn’t want another mother, father, sister or brother to go through what we went through. For no grandparents, aunts, uncles, cousins or friends should have to deal with what we’ve had to deal with.

I am not sure where you were as the men you ordered to kill my son, and seven others pulled the trigger but I am sure you were far away. My son died knowing all his loved ones were close by waiting in a hotel room to hear the news that he had been executed. My son did commit a serious crime but he also apologised to your country and your people many times.
In the last 10 years while you kept him in prison, he chose to do all within his power to make up for his crime. It wasn’t easy, I am not sure anyone will ever realise how hard it is to try to be a good man in prison, to be a positive role model for other younger prisoners, Indonesian prisoners.
Myu spent many years rehabilitating so many prisoners, he hoped that he could help as many people as possible, to give them a chance to leave prison to go out in the world a little better than they came inside.

Myu helped prisoners who struggled with drug use and many other issues.
My son never asked for his rehabilitation to be enough to free him from prison, all he asked was that he not be killed. Was it too much for you to let him live the remainder of his life in prison? I have heard that many others around you took the time to read and learn of the works of my son, and of Andrew and of the people they helped. Many of whom are now helping other people themselves. I cannot believe that all of his works could not even get you to even read the paper you were signing.
I remember when you were elected as President of Indonesia, my son was celebrating. My son told me that ‘Our new President is a man of the people, a person that would support education, rehabilitation and people bettering themselves’ and that you would look into everything he had done in the prison.

I guess he was wrong. As human being, I can’t even understand how you could sign a person’s death without looking into their personal circumstances. If you do not read what you are signing how can you know whether the life you are taking belongs to someone who is mentally unwell, or an old man in a wheelchair, or young mother with two children, or a father of two, or a man who has been in your prison for 17 years, or a gospel singer, or two young boys who made foolish mistakes. My son only hoped to live in prison for the remainder of his life so that he could be able to continue his good work, which has become known around the world.
All he wanted was to be given a chance to do that.
I as a mother was punished for 10 years as well for his crime, and I will be punished for the rest of my life now because you took his life. I did not ask you to send my son home. I just asked you not to order his death but instead you ignored me and many others. I asked to meet you, to speak to you but once again you could not even have the courage to face our requests to communicate with you. 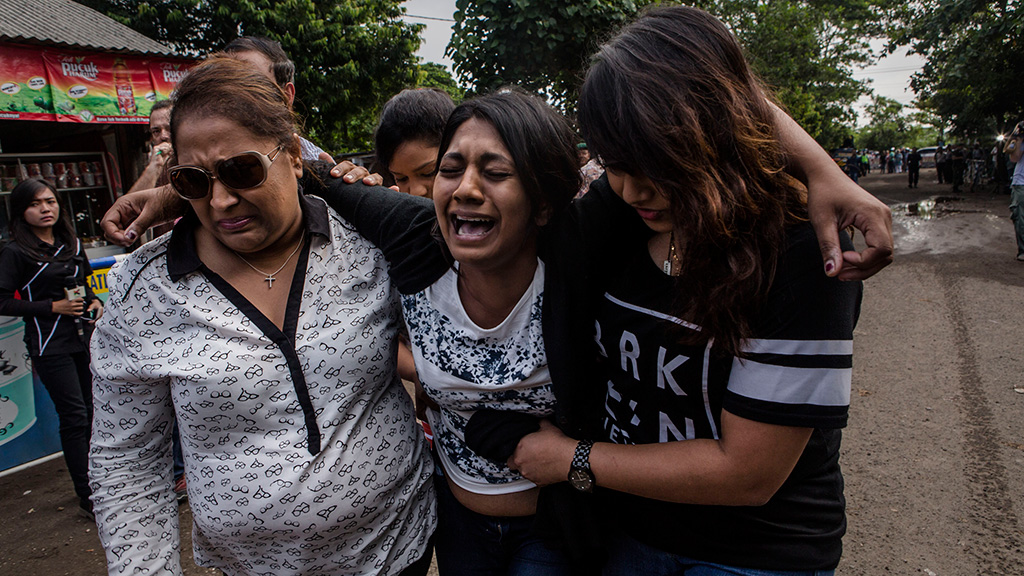 I will not have the chance to see him get married, have children. Mr President, do you think that your punishment towards my son after he had spent 10 years in gaol reformed and helping others and then executing him is fair and just? Do you as a leader feel that everyone who faces justice in Indonesia is treated fairly and equally? Do you believe that Indonesia has a justice system that doesn’t make mistakes? Do you not hear or read all the stories about corruption in criminal cases?
I think this is something very important —you have told the thousands and thousands of people in prisons across your country, that no matter how hard you work, no matter how much you change your life, no matter what your personal circumstances are — you will not receive mercy. You ask them to not try, as I have never heard of anyone in prison around the world doing the works my son has done — it was still not enough for you to read his clemency application.

I hope your wife would understand what myself and Andrew Chan’s mother are going through. I felt so helpless as I watched my son walk away, healthy and full of life. I watched as over the last four months you tortured him by making jokes about his life, making him guess the night he would be taken, openly discussing the way in which he would die, parading and humiliating our family.
We made funeral plans for our sons while they were still alive. This was because we were told you the President had not changed your mind, and that you had ordered the executions to be carried out, despite the world wide outcry to let our sons live. I want to ask you to put your family in my situation. Only days before I saw a video in which you said that you did not want Indonesians to be killed overseas.
I know as I write this letter, the death of our children will not make any difference to drug trade in Indonesia. I am sure you know this, and that your reasons for taking these 8 lives had nothing to do with preventing drugs and everything to do with your politics.

I hope that your children, your grandchildren, your nephews and nieces never make a mistake. I also want you to remember when your child falls in love, gets married, makes plans for the future, that Andrew Chan also fell in love, made plans for his future and was executed. How would it feel if this was your son?
I was told as my son said his last words, one of the last things he did was say a prayer for Indonesia. My son sought forgiveness for your country and the men taking his life, as he knew you did not know what you were doing. This was the man you ordered to die. I am not sure whether I could ever forgive you, I hope that I have that much grace and compassion in my heart one day. But I am sure this pain in my heart will stay with me for the rest of my life, and it hurts so much. Think for a second, one of your children is tied to post, and men are lined up in front of them and the fear he would have felt, and then your child is shot through the heart. My son was young and foolish, he did not deserve to suffer like this.
My son will be missed by so many people who love him and so many people are finding it difficult to come to terms with what has happened.
As I finish this letter I pray for the many other men and women whose lives are in your hands, especially those on death row. I pray that you will have the courage to look beyond the politics for they too have families who love them despite their mistakes.