Prince Harry’s first ever tweet is a gym selfie of him post-workout and we’re loving the fact the royal has finally given in and fallen under the Twitter spell.

In a really unroyal move, he showed off his post-workout body with his mate Ryan Crotty, who just happens to be an All Black rugby player.

The 30 year-old is currently in New Zealand on an official visit and decided his workout was the perfect first tweet (we know it is from him because it says ‘H’ at the end).

He wrote: “Casual after work workout in @crusadersrugby gym with @ryan_crotty – H”

Last year Harry said he hated Twitter because it meant he had even less privacy than before, because of all the camera phones, but clearly he doesn’t mind it when he’s tweeting himself. Earlier this week a photo of a sunset, taken by the prince, was posted on the social media site. 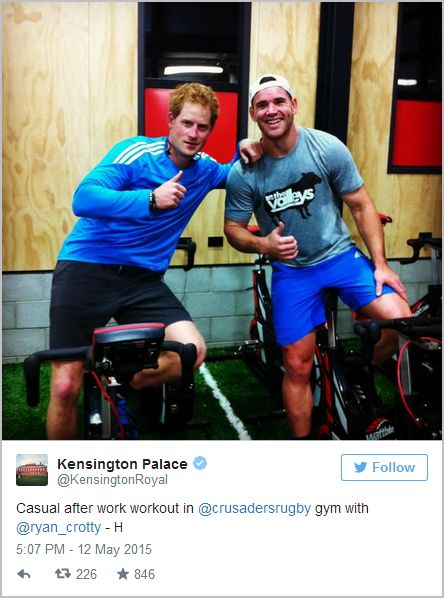