The biggest fight of the decade is over and done.

Floyd Mayweather won by a unanimous vote after 12 rounds, maintaining his undefeated ranking.

But if you ask us (and seemingly a lot of fans who spent good money on live streams of the bout) social media was the real winner on the day!

From the witty repartee, celebrity spotting and memes that will no doubt continue doing the rounds over the coming days.

The lead up to the match was focused on the fact that anyone who is anyone was at the match… oh, that and Paris Hilton getting way too much air time with her leather look and posing.

All three modern day Batmans are at #MayPac. I think they should fight.

No no do not show Paris Hilton again at #MayPac please

Damn! Michael Jordan is in the house!! #MayPac

People in the UK trying to stay awake like… #MayPac pic.twitter.com/16LTLDXFpC“

El pipo RT @SportsCenter: There are SO MANY private jets at the Las Vegas airport. #MayPac (via @LevanReid) pic.twitter.com/tUWe88lnSu

I wonder why @ParisHilton isn’t DJing for #MayweatherPacquiao tonight? Did she retire so soon?

Projected fight revenue larger than GDP of 29 countries (that nobody’s ever heard of). #MayPac pic.twitter.com/OWaO7ZlkPx

.@ParisHilton & @justinbieber in the same building. Who wants to see them take out each other? #MayPac

Then comes the entry into the arena. Mayweather had Justin Bieber in his entourage but suprisingly Manny’s wingman was none other than Jimmy Kimmel – so on that alone we feel he wins that round!

14 years in the gym for 1 night in the ring. #MayPac pic.twitter.com/VWWxeEkyN9

The match began without much fanfare, with a few missed opportunities from both sides… and a few too many embraces… for most dedicated boxing fans’ liking.

Others who were more into the spectacle than the fight seemed more distracted by Beyonce in the audience and trying to figure out how the score would be settled without a KO.

Mayweather is leading in hugs given. #MayPac

So wait, when’s the halftime show? We want @Beyonce. #MayPac

I’ve had more violent fights with vending machines that refused to adequately dispense my Kit-Kats. #MayPac

Wow, I haven’t heard the word “disappointing” this much since the last time I talked to my parents! #MayPac

Dancing with the stars had a good episode today #MayPac

There was more intensity between my kids fighting over the remote this afternoon. Less hugging too. #MayweatherPacquiao #MayPac 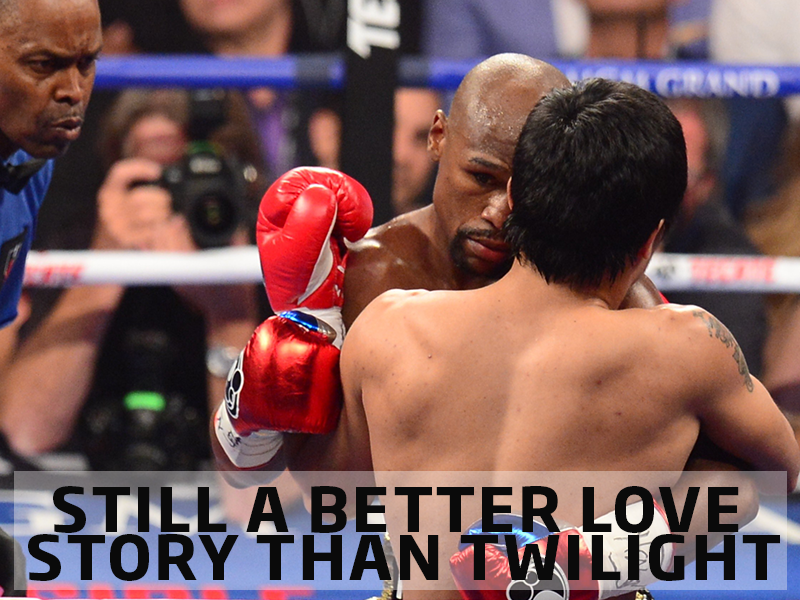