Ines Basic has been labelled the resident villain on this season of MAFS after her lack of care for anyone else’s feelings, bluntly rude comments and of course being the apparent instigator in the cheating scandal with Sam Ball.

But Ines has seemingly broken her silence on the label and it appears that she too thinks that producers are to blame for allowing her to be perceived so negatively on the show.

The 28-year-old legal assistant has liked a fan comment on Instagram which slammed producers for allowing the cheating storyline to take place.

“I don’t understand why they both can’t admit they like each other, formed a connection and be honest,” the comment said in reference to Ines and Sam.

“I’m sure the others would have respected that early on if they were truthful. 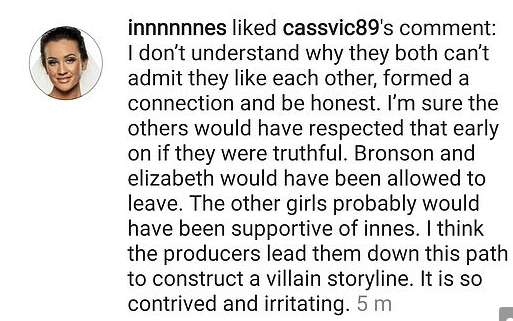 “I think the producers lead them down this path to construct a villain storyline. It is so contrived and irritating.”

Of course, we are in no way excusing Ines’ behaviour because even the most expert producers couldn’t force someone to say some of the horrible things that she has said so far this season.

But you have to admit, it seems very likely that the producers would be working behind the scenes to make the cheating scandal play out the way that it did behind everyone else’s backs.

While things may have been exaggerated for the sake of a storyline, Ines has also spoken out about her relationship with Sam on the show, saying that their connection was undeniable and “emotionally charged”.

“Everything with Sam and I was done at such a high-[aced, emotionally-charged level,” Ines said to 9Honey.

“We connected on a very different level. Like we didn’t really need to speak. We could just feel each other’s emotions. He said it was a very spiritual connection, a very mental connection. As if we could read each other’s thoughts and finish each other’s sentences.”

This comes amid reports that Ines is struggling to cope with the hate she’s online, with a source telling Woman’s Day that she has “lost about 12kg” since the show finished filming and has become a recluse.

Married At First Sight continues this Sunday at on Channel Nine, and judging by the ads it seems this cheating scandal is about to implode at the commitment ceremony.

A Fyre Festival Party Is Coming To Melbourne

Mafs 2019: This Boys' Night Spoiler Is Giving Us Flashbacks

The Cure Will Have Exclusive Performances At Vivid Live 2019