Australian film star Margot Robbie has turned heads in unusual attire at the London premiere of her movie Birds of Prey this week.

The 29-year-old, who is nominated for an Oscar for her role in Bombshell, donned a floor-length taffeta skirt and off-the-shoulder feather top to walk the red carpet. 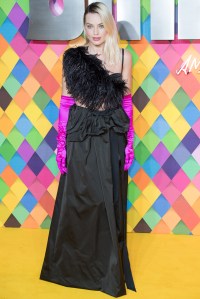 LONDON, ENGLAND – JANUARY 29: Margot Robbie attends the “Birds of Prey: And the Fantabulous Emancipation Of One Harley Quinn” World Premiere at the BFI IMAX on January 29, 2020 in London, England. (Photo by Jeff Spicer/Getty Images)

She completed the look with an elbow-length Marilyn Monroe-style pink gloves.

Birds of Prey is released in Australia on February 6th.

Missed The Christian O'Connell Show? Catch up by clicking play below and join us from 6AM every weekday!
Birds of Prey margot robbie Movie premiere