Gene Simmons, Paul Stanley, Eric Singer and Tommy Thayer voice their own characters in the film, which is set for release direct to Blu-ray, DVD and digital HD on July 10. Scooby-Doo! and Kiss: Rock and Roll Mystery will also include a new song created by Kiss, plus six classic tracks.

The movie finds Scooby, Shaggy and the rest of the gang attending a headlining Halloween concert by Kiss at the band’s amusement park, Kiss World, when trouble looms. They end up partnering to take on the Crimson Witch, a spooky villain who plans to summon the evil Destroyer from the alternate world of Kissteria. Fellow voice stars include Kevin Smith, Garry and Penny Marshall, Darius Rucker and others.

This isn’t the first time that Kiss have climbed aboard the Mystery Machine, by the way. And it it isn’t their first Halloween-themed caper either. The band appeared as part of a 2003 episode of What’s New, Scooby Doo? Back then, Kiss played a costume party when the ghost of Hank Banning arrives. Simmons, Stanley and company provided the soundtrack as our youthful sleuths – and their Scooby snack-scarfing dog, of course – saved the day. 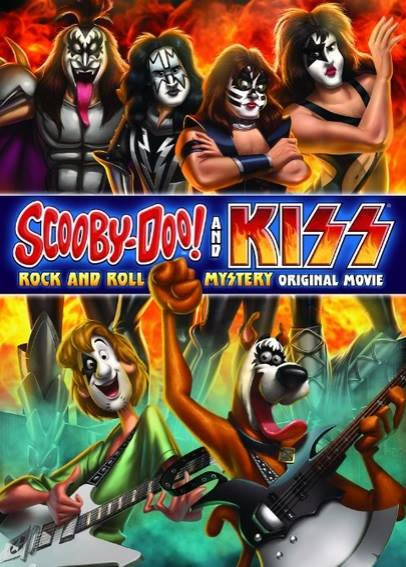