ASADA has called the Essendon supplements program absolutely disgraceful, saying it was an injection regime that led down players.

The body is expected to appeal today’s finding by the AFL anti-doping tribunal – which has ruled the 34 past and present Essendon players are not guilty of taking a banned substance.

The verdict on the 2012 supplements program means they’re clear to play in this weekend’s ROUND 1 matches. 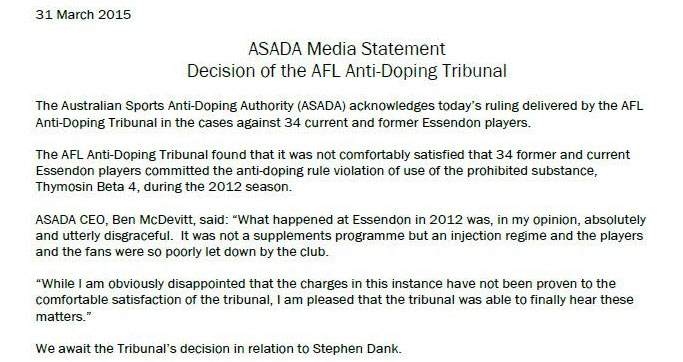 The Tribunal today handed down its decision, which was unanimous, and reasons for the decision with respect to the alleged violation by 34 players of the AFL Anti-Doping Code.

The Tribunal was comfortably satisfied that the substance Thymosin Beta-4 was at the relevant time a prohibited substance under the Code.

The Tribunal was not comfortably satisfied that any player was administered Thymosin Beta-4.

The Tribunal was not comfortably satisfied that any player violated clause 11.2 of the AFL Anti-Doping Code.

The Tribunal’s decision in relation to the violations under the Code alleged against a former Essendon support person will be handed down at a later date, together with the reasons for that decision.

The AFL anti-doping tribunal has cleared all 34 current and former Essendon FC players – of taking a banned substance.

That means up to 17 current Bombers players are free to play in Round One this weekend, as well as former players in other clubs like Bulldog Stewart Crameri, and Port Adelaide’s Angus Monfries and Paddy Ryder.

The 34 players aren’t out of the woods yet however, with ASADA and the World Anti-Doping Agency still free to appeal the decision for the next 21 days.